Call Us With
Your Project Today! 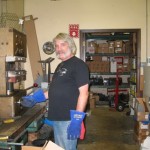 My mechanical background dates back to the early 1960’s taking apart small engines just to find out how and why they did what they did. Over the next 10 years I figured out the why and how and started repairing them. I worked at various garages as a mechanic until I realized it was the supplier part of the automotive world I had to be in.

During the early 1970’s I took up drag racing. I ran a front engine dragster along with many other race cars over the next 10 years or so. After my bout with race cars, I decided to try building my own car. During that time, I hand built a 1923 Ford Model T roadster, bought a 1938 Plymouth 2 door sedan, and hand-built a 1932 Ford.

I got back into my first love of drag racing in 2000, in a rather big way, with a 1960 Chevrolet BelAir. As the 2009 racing season came to a close, we decided to sell the car and turn our focus towards camping.

You can rest assure that when you send me an item to be rebuilt, whether it’s a fuel pump or an engine mount, I will treat it as if it were going on my own car.

Just wanted to say THANKS! Your service is second to none…Good old American craftsmanship and service is hard to find these
days.

I was very impressed with the service you gave me. Everyone was polite, the salesman was very thorough so we would get the right pump kit, It was affordable, shipping and handling was reasonable, and shipping was lightning fast.

I just wanted to say thank you so much for taking your time to help me unstuck the valves in my 1936 Nash fuel pump.

Thank you for the time and trouble you took to meet my requirements and congratulations on running a first class service.

The kit you provide is far superior to anything available in the UK.

Just wanted to drop a quick thank you note for the service you have given me. I sent in an old bronze fuel pump last spring, it came back looking like new. I have sent it back for servicing since and am amazed at how quickly I get it back.