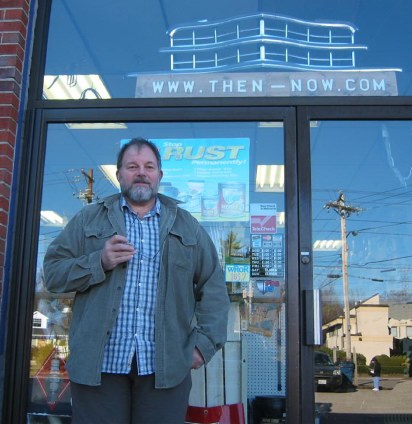 Back in High School (1967?) Tom and his oldest friend Dave found a Model A Ford engine in a rocky farm field being savaged into an industrial park. Bitten by the restoration bug they “saved” a starter motor from it. A cruiser rolled up as they were closing the trunk on Tom’s ’68 Mustang, but the officer’s vision of two “grand theft auto” arrests shattered when the developer refused to take the starter motor back, insisting they take the engine too….

The engine and (working!) starter motor lead to a 1929 Model A Closed Cab Pickup, then a 1934 Plymouth PE Business Coupe. That lead to parts searching- auto parts stores, local junkyards, flea markets, and parts vendors. It was a jungle for a couple of innocent kids with a few bucks to spare. No matter what the item, the guy selling it swore it fit either one project or the other. Nobody guaranteed anything- you paid your money and took your chances. Few vendors bothered with parts books or part numbers or specifications. As piles of parts, most incorrect, started to grow in Tom’s garage, he wished there was a vendor who knew what he had and stood behind his work and his word and had the repair information a person needed to work on antique cars…

The Plymouth was on the road quickly, with the Ford following. Graduation split the partnership. Dave drove off in the ’34 Plymouth, Tom left the Model “A” behind when he went to Tufts University (LA-1973, BA in Geology and Sociology, closest thing offered to Anthropology/Archaeology). The restoration virus was dormant. After college, Tom had the Model “A” running, and was tinkering on a ’31 Buick 8-50 and a ‘30 Hudson Great 8 and a ‘37 Desoto 6, and then his own ’34 Plymouth PE. This menagerie lead him to more vendors and old parts houses who wanted to sell all their old stuff. Soon he realized he was in business, not just tinkering. That meant he’d best make himself into that vendor he’d always wanted to find, and “Antique Auto Parts Cellar” was born. Tom’s kept buying parts and books, traveling west to Colorado, Montana, and Idaho and south into Georgia, Mississippi and Missouri north to Ontario, Canada. Soon he had a modest mail order business going, he had full time employees, then they opened a retail store, “Then & Now Automotive”.

A few years later Dave opened his “Studebaker Parts & Services” nearby. That farm field is a medical complex- maybe they’re working on a cure. Too late for these two, though!

Thanks for visiting our website! We have been working hard to complete our new web store, which will allow you to see our inventory, make a purchase, and have it shipped all in one convenient location. Cool stuff!